The Math Behind Bitcoin

One reason Bitcoin can be confusing for beginners is that the technology behind it redefines the concept of ownership.

To own something in the traditional sense, be it a house or a sum of money, means either having personal custody of the thing or granting custody to a trusted entity such as a bank.

With Bitcoin the case is different. Bitcoins themselves are not stored either centrally or locally and so no one entity is their custodian. They exist as records on a distributed ledger called the block chain, copies of which are shared by a volunteer network of connected computers. To “own” a bitcoin simply means having the ability to transfer control of it to someone else by creating a record of the transfer in the block chain. What grants this ability? Access to an ECDSA private and public key pair. What does that mean and how does that secure Bitcoin?

Let’s have a look under the hood.

ECDSA is short for Elliptic Curve Digital Signature Algorithm. It’s a process that uses an elliptic curve and a finite field to “sign” data in such a way that third parties can verify the authenticity of the signature while the signer retains the exclusive ability to create the signature. With Bitcoin, the data that is signed is the transaction that transfers ownership.

But first, a crash course on elliptic curves and finite fields.

An elliptic curve is represented algebraically as an equation of the form: 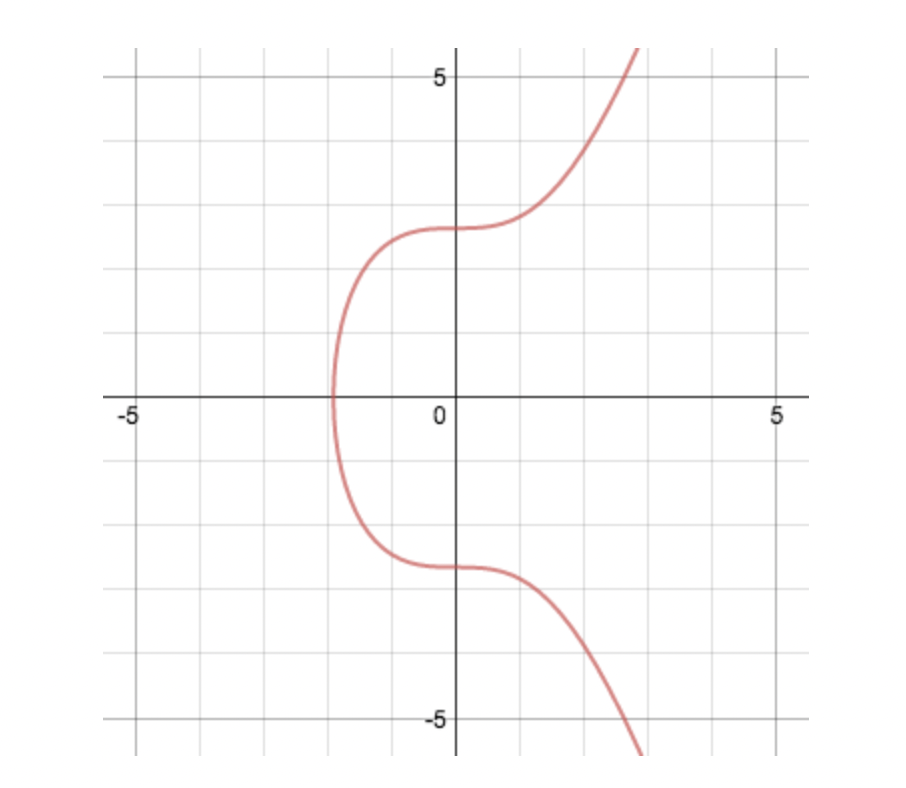 We can use these properties to define two operations: point addition and point doubling.

Point addition, P + Q = R, is defined as the reflection through the x-axis of the third intersecting point R’ on a line that includes P and Q. It’s easiest to understand this using a diagram:

Similarly, point doubling, P + P = R is defined by finding the line tangent to the point to be doubled, P, and taking reflection through the x-axis of the intersecting point R’ on the curve to get R. Here’s an example of what that would look like: 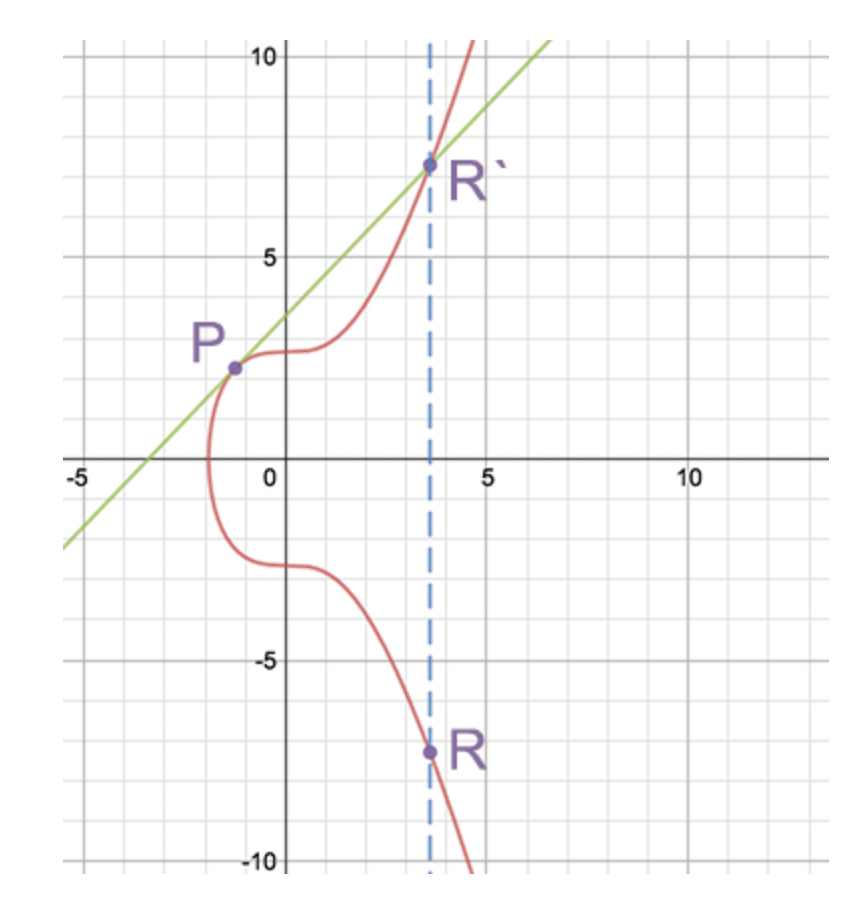 Together, these two operations are used for scalar multiplication, R = a P, defined by adding the point P to itself a times. For example:

The process of scalar multiplication is normally simplified by using a combination of point addition and point doubling operations. For example:

Here, 7P has been broken down into two point doubling steps and two point addition steps.

A finite field, in the context of ECDSA, can be thought of as a predefined range of positive numbers within which every calculation must fall. Any number outside this range “wraps around” so as to fall within the range.

The simplest way to think about this is calculating remainders, as represented by the modulus (mod) operator. For example, 9/7 gives 1 with a remainder of 2:

Here our finite field is modulo 7, and all mod operations over this field yield a result falling within a range from 0 to 6.

ECDSA uses elliptic curves in the context of a finite field, which greatly changes their appearance but not their underlying equations or special properties. The same equation plotted above, in a finite field of modulo 67, looks like this:

It’s now a set of points, in which all the x and y values are integers between 0 and 66. Note that the “curve” still retains its horizontal symmetry.

Point addition and doubling are now slightly different visually. Lines drawn on this graph will wrap around the horizontal and vertical directions, just like in a game of Asteroids, maintaining the same slope. So adding points (2, 22) and (6, 25) looks like this:

Back to ECDSA and Bitcoin

A protocol such as Bitcoin selects a set of parameters for the elliptic curve and its finite field representation that is fixed for all users of the protocol. The parameters include the equation used, the prime modulo of the field, and a base point that falls on the curve. The order of the base point, which is not independently selected but is a function of the other parameters, can be thought of graphically as the number of times the point can be added to itself until its slope is infinite, or a vertical line. The base point is selected such that the order is a large prime number.

Bitcoin uses very large numbers for its base point, prime modulo, and order. In fact, all practical applications of ECDSA use enormous values. The security of the algorithm relies on these values being large, and therefore impractical to brute force or reverse engineer.

In the case of Bitcoin:

Who chose these numbers, and why? A great deal of research, and a fair amount of intrigue, surrounds the selection of appropriate parameters. After all, a large, seemingly random number could hide a backdoor method of reconstructing the private key. In brief, this particular realization goes by the name of secp256k1 and is part of a family of elliptic curve solutions over finite fields proposed for use in cryptography.

With these formalities out of the way, we are now in a position to understand private and public keys and how they are related. Here it is in a nutshell: In ECDSA, the private key is an unpredictably chosen number between 1 and the order. The public key is derived from the private key by scalar multiplication of the base point a number of times equal to the value of the private key. Expressed as an equation:

This shows that the maximum possible number of private keys (and thus Bitcoin addresses) is equal to the order.

In a continuous field we could plot the tangent line and pinpoint the public key on the graph, but there are some equations that accomplish the same thing in the context of finite fields. Point addition of p + q to find r is defined component-wise as follows:

And point doubling of p to find r is as follows:

In practice, computation of the public key is broken down into a number of point doubling and point addition operations starting from the base point.

Let’s run a back of the envelope example using small numbers, to get an intuition about how the keys are constructed and used in signing and verifying. The parameters we will use are:

First, let’s find the public key. Since we have selected the simplest possible private key with value = 2, it will require only a single point doubling operation from the base point. The calculation looks like this:

Here we have to pause for a bit of sleight-of-hand: how do we perform division in the context of a finite field, where the result must always be an integer? We have to multiply by the inverse, which space does not permit us to define here (we refer you to here and here if interested). In the case at hand, you will have to trust us for the moment that:

Our public key thus corresponds to the point (52, 7). All that work for a private key of 2!

This operation — going from private to public key — is computationally easy in comparison to trying to work backwards to deduce the private key from the public key, which while theoretically possible is computationally infeasible due to the large parameters used in actual elliptic cryptography.

Therefore, going from the private key to the public key is by design a one-way trip.

As with the private key, the public key is normally represented by a hexadecimal string. But wait, how do we get from a point on a plane, described by two numbers, to a single number? In an uncompressed public key the two 256-bit numbers representing the x and y coordinates are just stuck together in one long string. We can also take advantage of the symmetry of the elliptic curve to produce a compressed public key, by keeping just the x value and noting which half of the curve the point is on. From this partial information we can recover both coordinates.

Signing Data with the Private Key

Now that we have a private and public key pair, let’s sign some data!

The data can be of any length. The usual first step is to hash the data to generate a number containing the same number of bits (256) as the order of the curve. Here, for the sake of simplicity, we’ll skip the hashing step and just sign the raw data z. We’ll call G the base point, n the order, and d the private key. The recipe for signing is as follows:

As a reminder, in step 4, if the numbers result in a fraction (which in real life they almost always will), the numerator should be multiplied by the inverse of the denominator. In step 1, it is important that k not be repeated in different signatures and that it not be guessable by a third party. That is, k should either be random or generated by deterministic means that are kept secret from third parties. Otherwise it would be possible to extract the private key from step 4, since s, z, r, k and n are all known. You can read about a past exploit of this type here.

Let’s pick our data to be the number 17, and follow the recipe. Our variables:

2. Calculate the point. This is done in the same manner as determining the public key, but for brevity let’s omit the arithmetic for point addition and point doubling.

Note that above we were able to divide by 3 since the result was an integer. In real-life cases we would use the inverse of k (like before, we have hidden some gory details by computing it elsewhere):

As with the private and public keys, this signature is normally represented by a hexadecimal string.

Verifying the Signature with the Public Key

We now have some data and a signature for that data. A third party who has our public key can receive our data and signature, and verify that we are the senders. Let’s see how this works.

With Q being the public key and the other variables defined as before, the steps for verifying a signature are as follows:

Why do these steps work? We are skipping the proof, but you can read the details here. Let’s follow the recipe and see how it works. Our variables, once again:

Let’s break down the point doubling and addition in uG and vQ separately.

Working our way from the inside out:

And now for vQ:

Clearly step 5 is the bulk of the work. For the final step,

Our signature is valid!

For those of you who saw all the equations and skipped to the bottom, what have we just learned?

We have developed some intuition about the deep mathematical relationship that exists between public and private keys. We have seen how even in the simplest examples the math behind signatures and verification quickly gets complicated, and we can appreciate the enormous complexity which must be involved when the parameters involved are 256-bit numbers. We have seen how the clever application of the simplest mathematical procedures can create the one-way “trap door” functions necessary to preserve the information asymmetry which defines ownership of a bitcoin. And we have newfound confidence in the robustness of the system, provided that we carefully safeguard the knowledge of our private keys.

In other words, this is why it is commonly said that Bitcoin is “backed by math.”

If you hung in through the complicated bits, we hope it gave you the confidence to take the next step and try out the math on your own (a modular arithmetic calculator makes the finite field math much easier). We found that going through the steps of signing and verifying data by hand provides a deeper understanding of the cryptography that enables Bitcoin’s unique form of ownership.

Special thanks to Steven Phelps for help with this article